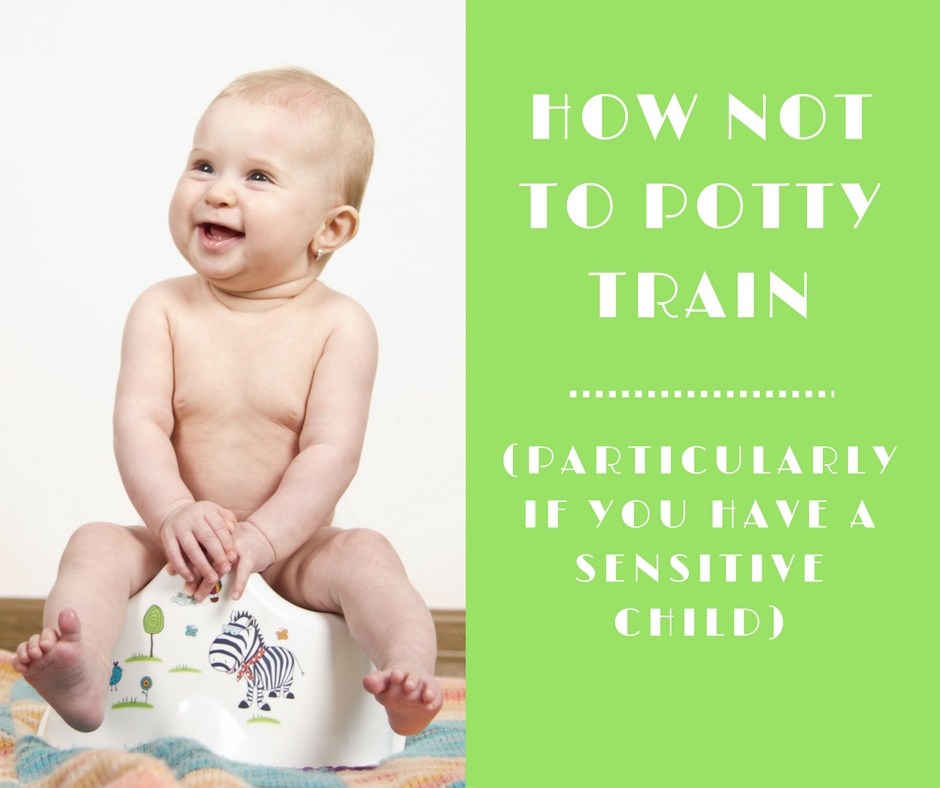 I suspect that one of the problems for the old woman who lived in a shoe (and perhaps one of many reasons why her children were so unhappy and unruly), was that once she’d found a couple of approaches that worked with the first few of her children, she assumed it would work for all of them.

Forgetting, of course, (or probably more like not having a single second to think straight) that each child comes to us with a unique temperament and so needs to be parented equally uniquely.  The more she tried to impose her one-sized-fits-all parenting on all her children, the more misunderstood and disconnected these children became.  As the children’s behaviour became increasingly defiant and off-track, the poor woman was so overwhelmed and fed-up that she felt her only resort was to whip them.

And so it has been with potty training my children.  Well no, of course not exactly like this, and not the whipping bit, I promise!  But in the sense that with my third I felt confident that I knew the score, knew what worked, and having ‘done it’ twice before felt very relaxed about it.  I trusted that once he was displaying the much discussed ‘signs’ or readiness it would be a smooth ride from there on in.

Forgetting though that he is a very different character from his siblings.

Forgetting that he can be super, super sensitive – and particularly so in terms of interpreting the nuances of emotional expression.

So, when one day at around the age of two and a half he started to show an interest and willingness to sit on the potty I just assumed we were away and that within a week or so we’d be a nappy-free household.

There he solemnly sat on the ever-so-slightly grimy, third-hand potty with excited spectators all around, eagerly anticipating what would be produced.

Finally, up he jumped, potty hanging off his backside, saying “Did it mummy!”  I prised the plastic from his red-ringed bottom and we all peered in.

And there inside was the teeniest, tiniest wee, about the size of a 50 pence piece – but the cue, nonetheless, for us all to go ever-so-slightly-over-the-top-excited!  Well, particularly me, I guess, and his brother and sister were just following my lead.  Exaggerated praise, kisses, high-fives – and his sister was soon rushing downstairs to find some stickers for him!

Unsurprisingly, the poor boy was quickly overwhelmed and his smiles very soon turned to bewilderment.  By the time his sister was back upstairs again with her ‘rewards’ he’d scooted out of the bathroom and into his room to play by himself.  He wanted nothing to do with the stickers and nothing to do with emptying the potty out or flushing it away.

And who can blame him??  He knew perfectly well that none of these shenanigans happen for anyone else in the household.  There he was merely modelling a perfectly ordinary daily occurrence and suddenly everyone went straight-up, cracker-jack barmy.  He was most bemused by our bizarre behaviour, and unsurprisingly given his nature, it also made him feel overwhelmed and anxious.

Unfortunately, the next evening, I managed to inadvertently add to his anxiety.  He was happily playing in the bath, and then looked up and said, “Mummy I’m doing a poo poo”.  Instead of calmly asking if he’d like to get out of the bath and do it in the potty, without saying a word I whipped him out and unceremoniously dumped him on it.  With practically the same urgency as if he’d told me there was a crocodile in the bath.  I know, I know, jeez, what on earth was I thinking, why the irrational switch to crisis mode??

In hindsight, it is very easy to see why these were his first and last attempts at potty training for a good six months more!   He adamantly refused to go near the potty or toilet and it was very evident that he needed some space and time to process and heal the anxiety I had stirred up.

After this realisation, I was careful to rarely mention the potty again to him, apart from occasionally breezily saying things like, “Yes, Tommy is using the potty isn’t he? When you’re ready, I know that you’ll do that too”.  And sure enough, one day when he was nearly 37 months he didn’t want to put his nappy on.  He willingly put on pants and took himself to sit on the big toilet.

I can’t tell you how heedful I was to act nonchalant and there was definitely no clapping or stickers!   A week later we went on a very long car-trip and there wasn’t a nappy or plastic bag to sit on in sight.  No constant asking/reminding, obsessive checking for wet patches, insistence he went before getting in the car.  He’d made the decision himself, completely ‘got it’ and as a result it ended up being a very simple and stress-free transition.

It obviously wasn’t a period of parenting where I covered myself in much glory.  But as is often the case, on reflection, it taught me a lot.  In particular, it reinforced the importance of being respectful towards my kids, treating them as unique individuals and adapting my parenting accordingly.  Something I thought I was aware of and doing, but actually in this case most definitely wasn’t!